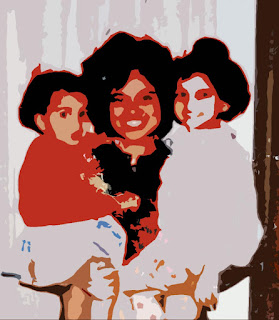 It all started the day my second daughter was born. It was a lovely day in March, clear, crisp and cool. As I breathed in the fragrant air I felt my cup of joy brimming over.

Which only shows how innocent I was to the ways of the world.

The smart starched nurse in the snow-white uniform who was tucking me in said casually:


‘I hope you’re happy beti, you seem to look it,’ she said, as if she were surprised.
‘I am,’ I answered, trying to read between the lines.
My gynecologist, a lady with high heels and a sophisticated hair-do added lightly, ‘Looks like we are going to have you here again soon… for a third try.’ She laughed.


I knew what she meant. Yet, I joined in the smiles, although a trifle weakly. It hit me then, minutes after my second daughter was born, that giving birth to a second daughter was special. Only one-third of the population managed it and clearly, it didn’t make them popular.

When my parents arrived I noticed that though my father looked happy, he was trying to hide his real feelings. Nervousness? My mother was less diplomatic and avoided all eye contact.

Or was I going mad with imaginings?
Here I was, dying to hug them and shout from the rooftops about how wonderful it was to have a baby...but I remained silent.

I heaved a huge sigh of relief when my friends trooped in. Ah ha! Here come my generation of people. I can tell them what I really feel. Or so I thought.  I found that they were acting strangely. Their manner was a little too hearty, and they did not give me a chance to talk. And when they thought I wasn't looking, they threw in my direction strange searching glances.

By the time I went home to my father’s place I had caught on – and was not amused. Everything will return to normal, I told myself miserably.

However the nursemaid who came in to attend to me and the baby dashed those hopes. She was middle-aged with a leathery wrinkled skin and gnarled hands, but she had five sons, she told me proudly.

The world changed. I stopped watching Mahabharat on TV. I stopped chatting with the baby.


My neighbor, a frequent visitor, never ceased to advise me, ‘Beti, you are young. After a couple of years you can try again.’
‘But I like daughters.’ I told her. ‘Even if the next one is a girl I’ll be happy.’ My mouth had opened at last, and as I expected my neighbor was horrified. ‘Three daughters!’, she exclaimed, as it were a fate worse than death.
Seeing me sniff, my mother said, ‘This is normal after delivery.’
Our neighbor nodded wisely, ‘This is not an ordinary shock.'


It was no use trying to convince anyone of the truth. Nobody would have believed me anyways.

A month later it was time to go home, to my husband. I wanted to leave it all behind, but my flight home was not uneventful.


On one side I had a lovely lady whom I could not resist asking, ‘How many children do you have?’
She answered hesitantly, looking very embarrassed, as if she had a guilty secret. ‘I have two daughters,’ she said.
On the other side of the aisle there was this respectable looking gentleman who had been eyeing both my children for some time. He said at last: ‘That’s a very good looking baby boy.’
I gave him my brightest smile and said, ‘It’s a girl.’


I had to put up with his sympathy for the rest of the flight.

Words cannot describe my relief at catching sight of the father of my children and his glowing face. At last I could share my true joy, the joy of giving birth to a beautiful daughter. 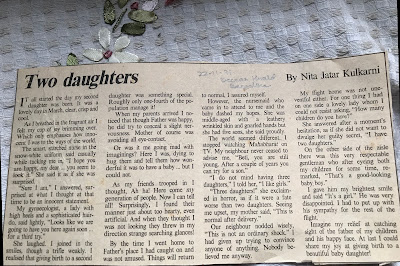 (Slightly revised after it was published in the Deccan Herald as a middle, years ago.)