A gentle and gutsy girl – a short story for children.

Rinky was a fun-loving ten-year-old with short hair and a pug nose. She lived in a very tall building in the heart of Bombay. Rinky could skate really fast, turn cartwheels and somersaults, run the fastest, and swing higher than anybody else. She always wore jeans and T-shirts (except in school of course) and played only with the boys. In her heart of hearts, she wished she was a boy too.

In the same apartment building where she lived, there lived another girl called Shobha. Shobha was a soft-spoken, gentle girl. Rinky found her very "girlish" and "silly" and refused to talk to her. If her mother even suggested that she should become friends with Shobha, Rinky would get upset.

‘Shobha is a stupid girl,’ she would say. If her mother disagreed, Rinky would
argue fiercely. ‘She is! She is!’ she would insist. ‘She wears frilly dresses and plays with dolls!’

‘There is nothing wrong in playing with dolls,’ Rinky's mother told Rinky, not once but many, many times. ‘All girls play with dolls. You too are a girl, Rinky.’ Nothing would irritate Rinky more than being reminded that she was a girl. I am a different type of girl, she would tell herself. Her mother did not understand that. Why didn’t she realise that she, Rinky, was better than all the other girls?

Rinky’s attitude worried her mother, Seema. Something had to be done. But what? Luckily for Seema, fate intervened in the form of Bunty. Bunty was the new boy who came to live in their apartment building. He was twelve and tall for his age. His favourite pass-time was to catch poor dragonflies, tie strings on their tails and fly them like kites. He also enjoyed teasing Ashit, the youngest of their gang. However, his real pleasure was targeting Rinky. Imagine, a girl in a boy’s gang, and getting so much importance from them! 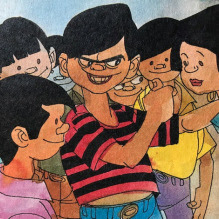 From the day Bunty arrived in the building, not a day passed when he did not pick a quarrel with Rinky. During any such shouting match, Rinky would notice Shobha watching them from the balcony and she would burn with shame. How Shobha must be laughing at her now, for refusing to play with her!

Rinky's mother, Seema, noticed that Rinky had become quiet and withdrawn. She would avoid going down to play. Maybe this was a good opportunity to convince Rinky to make friends with Shobha. ‘Why don’t you play with Shobha?’  Seema suggested. ‘She is a good girl. Her mother told me she comes first in class.’

This was the last thing Rinky wanted to hear, as she herself was not good at studies. One day, after a horrible quarrel with Bunty, over who should be the den, Rinky bumped into Shobha on the staircase. ‘I want to say something to you,’ Shobha said.

Rinky was surprised. Shobha had not talked to her for months. ‘About what?’ Rinky demanded, expecting Shobha to say something mean like: this is what happens when you play with boys. Instead, Shobha said, ‘We should teach that horrid bully a lesson. And I have a plan.’

Rinky looked at Shobha’s frilly dress and fancy pink shoes and could not suppress her giggle. ‘What can you do?’ she asked.

‘Just you wait and see,’ Shobha said, tossing her long, silky hair, and Rinky thought she saw a tear in her eyes.

Rinky soon forgot about the conversation. A few days later when Rinky was standing in the balcony, wondering whether to go down and play, she saw Shobha downstairs. Shobha was wearing a pair of jeans and a T-shirt. As she watched, she heard Shobha call out to Bunty and challenge him to a fight.

Shocked, Rinky raced down the stairs. This was dangerous! She didn’t like Shobha, but she didn’t want anything bad to happen to her. Bunty was strong. Rinky knew it because he had slapped her more than once. When she reached the compound, she found that the others in the gang had collected there too. Six-year-old Ashit, eight-year-old Chirag, Rohan from her class, and his older brother Chetan. They were all looking at Shobha, who was now half-crouched, her fists clenched, like in the Kung Fu movies! Rinky couldn't believe her eyes.

Bunty was just a few feet away and he didn’t seem to be afraid. In fact, he was smiling widely. He was probably looking forward to beating up Shobha. He advanced towards her impatiently, swinging his arm. All the children drew in their breaths. Rinky looked around frantically. Where were all the grown-ups? But today of all days each and every balcony was deserted. She looked back at the two in the arena her heart in her mouth.

Bunty had swung his fist but Shobha had ducked smartly and in a flash gave him a flying kick. Unprepared, Bunty lost his balance and fell flat on his face on the ground. He got up and touched his face. He looked at his hands and saw blood. His eyes widened in horror. 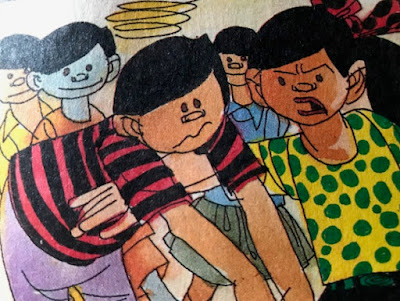 Bunty didn’t like blood, that was quite clear to Rinky. In fact, he looked as if he wanted to run away, but Shobha didn’t look as if she was going to let him. She was walking towards him, a grim look on her face. As she neared, Bunty let out a yelp and ran for his life! It was over!

All the boys now surrounded Shobha.

‘You were great,’ said Ashit, his eyes wide.

‘How did you do it?’ breathed Rinky, still quite stunned.‘

'I go for Karate class,’ said Shobha with a shrug. ‘This was nothing actually. He ran, like all bullies do.’

Rinky stared Shobha wonderingly. What a brave girl she was. Girls could wear frills and still be so gutsy! Rinky wasn't sure that she wanted to be a boy after all.

(Published in the Deccan Herald, Bangalore on the 18th of April, 1993. The illustrations, by SURYA, were published with the story).