From Kolkata to Siliguri

One day, many years ago, when my daughters Aditi and Tara were aged nine and seven respectively, we took an overnight trip from Calcutta to Siliguri. The train was to start at 8 p.m. in the evening and I hurriedly packed some cheese sandwiches for dinner. Before we left I shoved some bananas into the bag and grabbed a water bottle.

As soon as we found our seats, the kids demanded their dinner and within minutes had polished off the sandwiches. Then they balefully ate a banana each. Dinner finished and done with, I tucked them into bed, looking forward to a cosy winter’s night.

I had not bargained for our next-door compatriots. No sooner had the train jerked to a start, we heard the rustling of paper and the clanging of steel. An aroma of hot ginger tea drifted into our compartment, along with scolding adult voices and the whine of complaining children. I listened to the commotion with irritation but soon consoled myself that it was a good thing that they were having their dinner early. It meant that they would soon retire and we could go to sleep. But the rustling of paper continued, and the conversation got louder…and louder.

“Beta, have some more,’ a woman called out, a woman whom I gathered was the mother.
“Mummy I’m full!’ screeched a young girl.
‘Mummy spent the whole day preparing this for you! Khao!’ It was a man who spoke, and his stern voice seemed to settle the matter. There was a short silence and all that we heard for the next few minutes were chomping and slurping sounds, punctuated by an occasional belch.

The relative peace was broken with the sound of heavy foot-steps and over-hearty greetings.

Oh no, I groaned to myself. Guests.
‘Aha, kya swad hai,’ complimented one of the newcomers.
‘Baitho, baitho. Khao,’ came the instant invite. 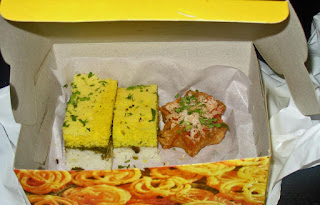 After a few polite refusals which no one paid any attention to, the guests joined the party. There was more rustling of paper, more clanging of steel. And everyone started to talk at once. They talked about food. About finding more plates, distributing water, opening bottles, sharing the parathas and the pickles…and occasionally, there was friction.
‘Mummy! Shivam took my laddoo!’ screeched the same girl whose had complained about being too full to eat anything.
‘Take this halwa then,’ said her mummy.
It was clear that mummy proceeded to serve the halwa to everyone else because a young boy’s voice piped up. ‘I hate carrots!’ he said.
‘The carrots are fresh from the farm, so eat that,’ said the father.
‘I don’t like halwa,’ said someone else. A new voice.
‘Kha lo beti, it’s not very sweet,’ said the mother.
‘Nooo, no! You know I don’t eat sweets,’ she protested.
‘She’s always dieting,’ rued her mother.
And so it went on…

I lay wide awake, marvelling at how people could talk endlessly about food…what they were eating, who had made it, how it was made, why someone was not eating…and why someone was eating

Hours seemed to pass and finally, the conversation petered out. And it looked like the remnants of the food was being packed.

I looked at my watch. It was nearing midnight. There was a brief debate as to whether some of the leftovers could be eaten the next morning or would they have to be thrown away. It was decided that the momentous decision would be taken the next morning.

Finally, there was silence. From across the aisle, my husband Anil winked at me. ‘What a party!’ he whispered. He thought it funny.

I didn’t. The heavy smell of oil and spices had lingered, and it made me feel slightly sick in the enclosed compartment. Even in the dim light, I could see that the corridor had been littered with food and plastic. As I drifted off to sleep I heard my nine-year-old ask her father in a plaintive voice. ‘Why did Mummy bring only bananas?’

The next morning as we were alighting I could not help peeking into the next compartment. To my utter delight, I saw two fat teenage girls with pimply oily faces, a rotund toddler of indeterminate sex, and an overweight ten-year-old boy. The father was a thin man with a large paunch and the mother a huge woman who could barely walk.

What Anil couldn’t understand was why I was so cheerful the whole day, in spite of the sleepless night.

Related Reading: Maid for each other (Humour) and Two Daughters (Humour)
- Tuesday, June 05, 2018