IT'S HERE - THE HAWA MAHAL MURDERS! 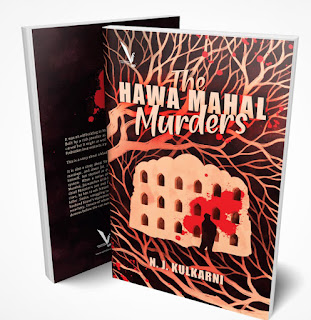 My book, a thriller set in Mumbai, was launched on the 20th of September 2019, at PILF19 (Pune International Literary Festival), with Javed Akhtar. It was published by Vishwakarma Publications. All this because I won the novel-writing competition at PILF18.

The book focusses on two characters: Smita, a troubled housewife trapped in a bad marriage (her second), and Jai, a police officer desperate to prove himself but stymied at every step by a crooked boss and a corrupt system.

When a series of murders take place in a posh locality in Mumbai, in a building (Hawa Mahal) where Bollywood personalities rub shoulders with industrialists (and the Chief Minister’s son) senior police officers scramble to save the CM’s son, and in the process, frame an innocent watchman.

Jai, determined to get at the truth, finds it hard to handle the intrigue and is on the verge of losing his job. Smita, struggling to salvage a deteriorating relationship with her husband, realises that she married for the wrong reasons, for the second time. She regrets her decision to put aside her career ambitions and has to consider the possibility that her husband is a serial killer.

The novel explores in-depth the minds of characters, including the serial killer, and touches upon societal issues in India, like corruption, the social divide, and women’s issues.

For more information on this novel click this link: The Hawa Mahal Murders.