The web is bursting at the seams with positive reviews of Wordpress, many of which compare WP with Blogger. But Blogger is more suitable for people like me.

I still have four blogs at WP (free ones), although only one is being updated currently, as of June 2019. Two of these used to have paid hosting at WP with bought domain names. I went for it because everyone said WP is the best. Now I work with blogger custom domains. But that's another story.

I wrote my first blog (nitawriter.wordpress.com) from Sep 2006 to Jan 2010. It did great, probably because there was less competition then. I have almost 1000 posts there, and scores of comments on each post, at times hundreds. I had followers in thousands. I stopped blogging because it was becoming a full-time job with zero revenue. Despite working so hard, with thousands of page views per day (684,047 views in 2010, although I stopped blogging in January of that year!), I was unable to monetize the blog on a free WordPress platform. It was too late to switch to a paid version because I would have lost my page rank.

That's a lot of views I think, although they were probably from feeds. The views continued to be quite good for several years although I abandoned the blog. 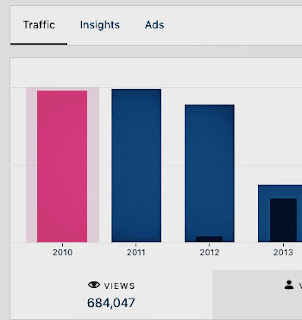 Wordpress did publish ads on my site but I got nothing. Later Wordpress started paying bloggers but it was too late for me. I had moved on. 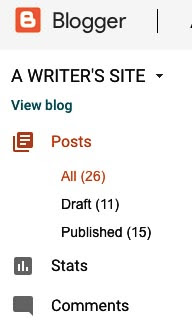 I moved to Blogger but did not revive my old blog. I was happy because I had control over the ads. I kept the ads muted. Money was never the main aim. I found Blogger limiting and I didn't like the themes (I missed Wordpress) but I made my peace with it. I did not want a full-time blogging job in any case.

I was spending some time on my two custom domains blogs on Blogger – one on Hand Reading and a photo blog.

But soon enough I needed a personal website because I had bagged a publishing deal for my crime novel. I still yearned for WP and in 2018 experimented with a paid plan of WP's, for a crime blog - crimeindia. It didn't last.

WP was disappointing. It wasn't what I expected, it had changed. My drafts hung frequently and I lost some of my work. I lost patience. I did not renew. Besides, I wasn't finding the time to update the blog. I told myself that if I was having issues with Wordpress, it was my fault. I wasn't tech savvy. I should give WP one more chance.

So I did. I had purchased my personal domain (nitajatarkulkarni.com) from WP and hosted with them too, taking the Personal Plan. I could not monetize despite paying Rs 250/- a month (for just the hosting as the domain name charges were separate). I convinced myself that WP was expensive because it was so good. I planned to upgrade in the future so I could monetize. As an author, I needed WP. I needed those bold, beautiful themes.

But I struggled. Posts hung (I have an excellent and fast internet connection which comes via fibre optic cables) and there were the usual hitches. After adding a link, I had to switch to HTML mode to continue writing because otherwise the rest of the sentence would get linked too. This became more difficult after their Gutenberg update as the button to switch to HTML was moved to an inconvenient place. True, the WP themes were good, but I was not tech savvy enough to use them optimally. Totally my fault.

Another irritant was that the preview opened in the same tab as the original post (unlike blogger). Worse, if one had to view a published post, one was not taken to the site. All one got was another preview! Another button had to be pressed – the "visit site" button. This was different from my experience in 2010.

The most confusing thing was the two separate interfaces. One you got at "WP Admin" and there was this another, modern one. One got to do things differently, depending on which interface you chose. All in all, Wordpress had gotten complicated. It was not intuitive. One struggled to make simple changes, especially on older sites.

I also disliked the intrusive pop up which said that "your cart is awaiting payment. Complete your purchase." Why would Wordpress tell me that I had something in my cart when I didn't? This was too aggressive for me. I hated this most of all.

In comparison, Blogger was easy. It never hung and it never tried to keep telling me that there was something in my cart when there wasn't. Switching from "compose" to "HTML" was easy. Adding labels to several posts at a time (or deleting them) was easy. The important thing was that you could easily find what you wanted to find without turning to Support. I could concentrate on my writing.

When I got a reminder to renew my personal blog at WP for more than Rs 4000/- a year – that did it for me. I don't know how it had increased this much as I was on the Personal Plan, or so I thought. Anyway, I had had enough. I was not going to pay for an annoying experience, even if it was all my fault. On Blogger, hosting was free. I would literally pay nothing! I mean, was there really any comparison between Wordpress and Blogger? Not for me. Not any more.

I switched hosting to Blogger – for free. And moved my domain to name.com at a nominal price.

This meant that my site (which you are reading) has a slightly altered URL (www. was added as a prefix) and there was some downtime. It was the price I paid.

I'm happy to be in a place where I can write without worrying about technical issues. Or wanting to call WP Support. Or scouring the web for answers. There are no annoyances either. Not yet. So for now, Blogger is my home.