Maid for each other

When the gaudily made-up gipsy with dazzling clothes stared into the make-shift crystal ball and muttered, ‘I predict dire trouble with household help,’ I laughed it off. After all, I was just a carefree college girl, come to the mela (fair) with giggling friends.

Ten years later when I arrived in Kolkata loaded with luggage, two under-sevens and a busy husband, what I needed the most was domestic help. I had not had much luck with maids earlier, but was hoping for a new beginning.

Cal, we were told, had its issues, but what it didn’t have was help issues. Didn’t we know that Kolkata's elite led a luxurious life with not one, but numerous help around the house? After roughing it out in cities like Delhi, Mumbai, and Bengaluru, where domestic help play hard-to-get and are expensive to keep, I now looked forward to living in the lap of luxury.

In just three months I had gory tales to tell. 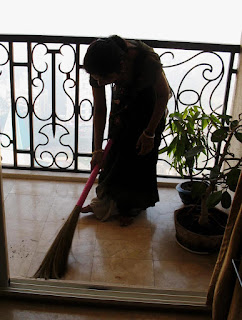 The first help, Roma, was a real phataka. Her flashing eyes, swinging hips and fiery tongue were sufficient to have me sneaking around the house hoping I wouldn’t set off her hot temper. After a few days of this, I decided that I couldn’t live in mortal fear of the help. So out she went.

The next one Bula, was a villager. Her skeletal frame and servile demeanour aroused pity in me and I wanted to help this poor creature who had been thrown out of her home by an abusive husband. She turned out to be a reluctant worker, and I realised she needed Mother Theresa, not me. So, out she went.

Supply was never a problem in Cal, and another landed up on my door-step within a few hours. Ratna she called herself. Pretty, well-dressed, and clean, she impressed me. She lived up to the first impressions. She was good at her work, worked with a song on her lips and a smile on her face. Shaking off an uneasiness I couldn’t account for, I started writing again.

Until one fine day, my husband Anil dropped a bombshell. Write all you want he said, but why do you need to drink so much? He sounded irritated. One litre of his finest scotch had dwindled to almost nothing in just three days! Suddenly everything came together in a flash. Ratna’s glazed eyes, idiotic grins…and extraordinary benevolence. Of course, she had to go.

When I related this experience to my neighbour, she laughed. ‘Silly, they all steal. You should have locked up the scotch.’

I pouted. It wasn’t my fault. I had just hired the wrong people. Honest help did exist.

Imagine how thrilled I was to discover that there was an agency which supplied household help, that too after informal training and police verification. It was a dream come true. Ignoring my neighbour’s scepticism, I called them. When they told me that I would get to interview one maid the very next day, I couldn’t stop smiling.

And that was how Mrs Meetu Sarkar entered our home. She came from a respectable family she told me, and with her expensive saree and subtle make-up, she looked it. I also liked her air of confidence and capability.

However, it rapidly dawned on me that it wasn’t her interview, but mine.


‘Is your TV in the bedroom?’ she asked.
‘Er, yes,’ I said.
She frowned disapprovingly, and I feared that she would refuse the job.
‘I can move it out,’ I ventured. ‘You will join, won’t you?’
She nodded. ‘Okay, but I am making it clear that I won’t come on Sundays as I work only six days a week And I never come before nine as I have to make my husband’s dabba.’
‘What about my husband’s dabba?’ I asked bravely.
‘That’s your job,’ she shot back.


I didn’t like her, but couldn’t tell her. Besides, I was desperate. So I kept her.

The television was moved into the drawing room, but as the days passed I realised it was a minor sacrifice. Mrs Meetu Sarkar was efficient, even with all her faults. She decided when I should write, which television programmes I should watch and what we should eat. But she was clean, and a hard worker. After a few months, however, I couldn’t help confiding in my neighbour about her bullying tendency. My all-knowing neighbour was sure that it was all my fault.

‘Take charge, be strict!’ she advised. ‘Or one day that woman will run your whole life.’

I tried. I avoided chatting with Meetu, pointed out her mistakes, and moved the telly back into the bedroom. I was thrilled when I realised that Meetu had become meek and quiet. And when she abruptly quit.

It wasn’t my fault, I consoled myself. This was written in my stars. The gipsy had said so.

(Revised version of what appeared in The Telegraph, Kolkata)
- Saturday, July 21, 2018