This is a short humorous piece I wrote for Deccan Herald, Bangalore. It can be called a slice of life piece, maybe. 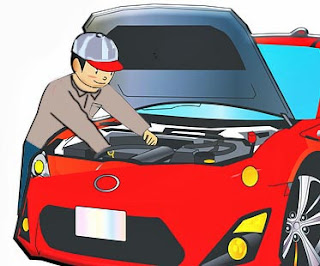 There is no doubt that some men have a ‘thing’ about cars. Call it a fetish if you will. It comes close to being emotionally involved with cars. They actually "care". They listen intently to her engine and are tuned in to her every dysfunction.

‘Something’s wrong,’ my husband often said, stopping a perfectly running car on a lonely road at high noon and disappearing under the hood. It would be half an hour before he would emerge, a satisfied look on his face, oblivious to my impatience.

‘She is fine now,’ he would mutter after a while as if that explained everything.

I am not ashamed to say that
to me at least, a car is a car is a car. It will always be. That is precisely why my better half was uncomfortable with the idea of teaching me to drive. I understood his concerns: his dearest possession would slip out of his hands, meaning his car of course. So when he said he had no time to teach me, I let it go.

I enrolled in a driving school instead. Thank heavens I did. My driving instructor, Stephen, had no hang-ups about cars. His was a healthy attitude which I could relate to. To start with, it did not matter to him if the car made funny noises, if the door did not shut properly or if the wipers squeaked. Stephen's only concern was that the car should move, preferably without a jerk. Period. So used was I to obsessive perfection that after I got over my initial uneasiness, I started to enjoy this tension-free method of driving, and the lessons progressed smoothly. 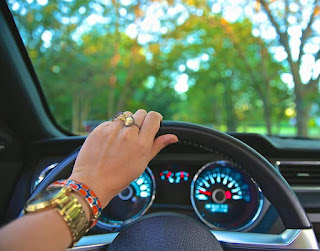 Lesson number one: Left foot on the clutch. Lesson number two: right foot on the accelerator. The way to proceed was: Brake, then hit the accelerator, then brake again, followed by the accelerator and brake! And preferably, keep just one hand on the steering wheel. The other was needed to constantly change the gears. If one lived in India, one-hand driving had to be mastered, my instructor explained. Considering the state of Bangalore traffic, I trusted that his way was the best.

I had a lot to learn. My greatest driving weakness, according to Stephen, was my nervousness at the wheel. Seeing me panic at the sight of a double-decker bus was upsetting to him.

‘Drive straight into it Ma’am,’ he admonished. ‘Nothing will happen and you’ll lose your fear! Try it!’

Inexperienced as I was, I obeyed blindly, reassured by the fact that he had a set of pedals on his side of the car. To my surprise, he didn’t need to use them. The bus screeched out of the way. If anybody had panicked then, it was the bus-driver!

Stephen’s reassuring words, nothing will happen, ma’am, held me in good stead through the lessons which followed. Those words could instil confidence in the meekest driver. In fact, his casual manner at the wheel, right elbow jutting out, his eyes admiring his filmi hairstyle in the wrongly positioned rear-view mirror, was a sure fire way of getting rid of anyone’s nervousness. Driving seemed a lark.

These were his other nuggets of gold: Always drive in the centre of the road, don’t ever get bullied. And Don’t let anyone overtake, ever, it will slow you down.

It was not long before I became the perfect driver, in Stephen’s eyes. ‘She is one of my best students,’ he raved to my disbelieving husband. ‘You should see how much control she has over the car, watch her blast through the marketplace, observe her overtaking techniques…’

After demonstrating the above-mentioned techniques to my husband, I was a little surprised when he wasn't impressed. He suggested that now he was ready to teach me because my driving needed a few ‘finishing touches' before he would let me drive our car. All of a sudden he had plenty of time to teach me!

(Published in the Deccan Herald as a "middle")

Pictures are from Pixabay.