I was lucky enough to be interviewed by Hindustan Times, Pune, almost immediately after my book release (1st December 2019) but somehow I had neglected to put this up on my website. I had got so busy with a few book readings and travel that I completely forgot to post this.

Well, here it is: 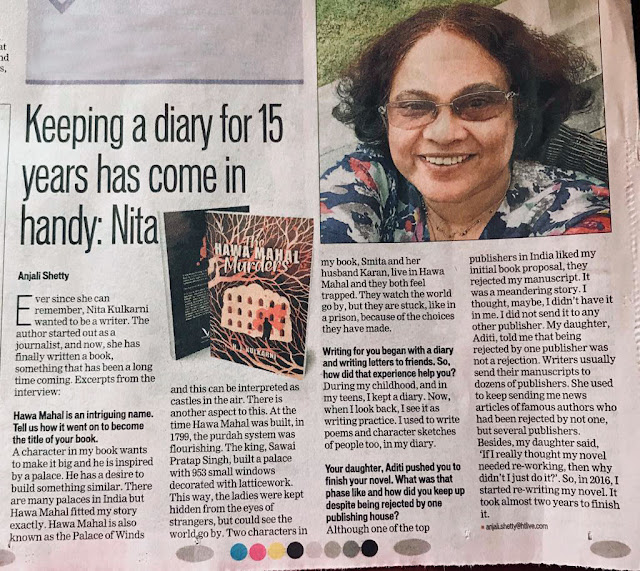 Here is the text version:

1. The genre of thriller originates from the gothic which has a large rambling castle as its setting. Since Hawa Mahal is a typical Gothic building what importance does it hold to your murder mystery thriller? Answer: There’s a character in my book called Raja who comes from a poor family. He wants to make it big and even fancies himself to be a king. He has grandiose dreams of building a palace just like Hawa Mahal. He does become very rich, and when he does, he has a building made on the lines of the real Hawa Mahal. Of course, it’s an imitation and that is the whole point. It’s actually an ugly building from an architectural point of view. So, in the novel, this building in Mumbai, called Hawa Mahal, becomes a symbol of sorts. Hawa Mahal is known as the Palace of Winds, but it can also be interpreted as castles in the air. The idea that I am trying to convey is that Raja, isn’t a success, not really. There is another meaning to why the building is called Hawa Mahal. The original Hawa Mahal was built with hundreds of windows so that the royal ladies could look outside without being seen, as the purdah system was in place then. I am trying to convey that the main character, Smita, is trapped in the building. She can see the outside but cannot really participate in life.

2. Thriller has seen quite a resurgence in India especially with the popularity of “Sacred Games”, which is itself an adaptation of the thriller novel of the same name. So, in your opinion why has thriller made such a comeback and why did you choose to write a thriller rather than a work of any other nature. Answer: Today’s generation likes fast-paced novels. We are in the age of cable tv, action movies and WhatsApp. But that is not the reason why I wrote a thriller. I wrote what I love to read. I love reading thrillers, always did, although of late I have been concentrating on writing. But my book is more than a thriller. I like to think that it tackles some underlying issues in this society.

3. Overcoming a bad marriage, as your character Smita does involve laying bare the vulnerability of being a woman. Why was it important for you that your character should have such an arc? Answer: I came from a liberal family, but I am not the norm. A vast majority of Indian women put aside their hopes and dreams and follow society’s dictates. The hold of the parents is very strong. Often, women do not even want to acknowledge that they are sacrificing something, they don’t want to face it, because if they do, then their life would become unbearable. So, I created a character with high self-awareness, someone who faced her fears and tried to make sense of her life.

4. How did you get the idea of the book? Walk us through your writing process. Answer: A part of the answer lies in the answer to question 3. I wanted to write about a middle-class Indian woman going through issues common to our society. I wanted a relatable character and relatable issues, in the Indian context. Even my other main character, Jai, goes through issues that people commonly face, a corrupt system for example. As for the story, it evolved by itself once I put my characters in difficult situations and in a particular setting.

6. What is on your current reading list? Answer: I have read one of Margaret Atwood’s novels and plan to read the others too. I like her writing style.

Check out all of my author interviews on this website.
- Thursday, March 19, 2020