At the Jaipur BookMark Literary Festival 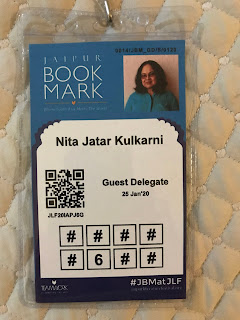 I spent a day at Jaipur BookMark (JBM) on the 25th of January. The organisers offered me a free delegate badge because I participated in the iwrite competition. I am not sure why they did because I had not been shortlisted. In any case, I had submitted a short story not a synopsis of a novel. Mostly the iwrite competitions are all about getting a book deal so I wasn't really expecting any response from them. Maybe from their point of view, offering a free delegate badge was nothing but for me, someone who was mulling over going to JLF for weeks, this was the nudge I needed. The free delegate badge I mean.

I had no idea what JBM was
all about but it sounded exciting. A B2B festival within the Jaipur Literary Festival (JLF). Basically a meeting point for authors, literary agents, and publishers. So I decided to go. I am glad I did because the sessions were interesting. The iwrite session was all about the shortlisted candidates presenting their ideas. There was a panel of judges including literary agents, an author, as well as publishers (the selecting jury). And now they could give their feedback directly to the writers. I thought they were a little harsh on those who had submitted their work. Some of the proposals were trashed, some dismissed and a few praised. What surprised me though was that hardly anyone who had submitted a proposal for a novel had actually completed their novel. I know that publishers do not consider a fiction book proposal unless the book is ready, so how come these proposals were selected? It seemed a little like a farce to me.

Anyway, for me as an observer, it was fun to meet literary agents and later on some of the other delegates after the sessions. I met a guy who manages Book2Screen, a company which lists books and sends the lists to potential film and serial producers. I met an old school mate who is frequently called to literary festivals to speak. I met a festival director of a small festival in India and a couple of literary agents. It was networking, nothing else. A first time experience for me. I managed to give a few copies of my books to the right people.

The next day I attended the JLF, the Jaipur Literary Festival. It was a Sunday and very crowded, more like a mela. More on this in my next post.

And oh yes, how could I forget. The perk of being a delegate at JBM were a few free books! 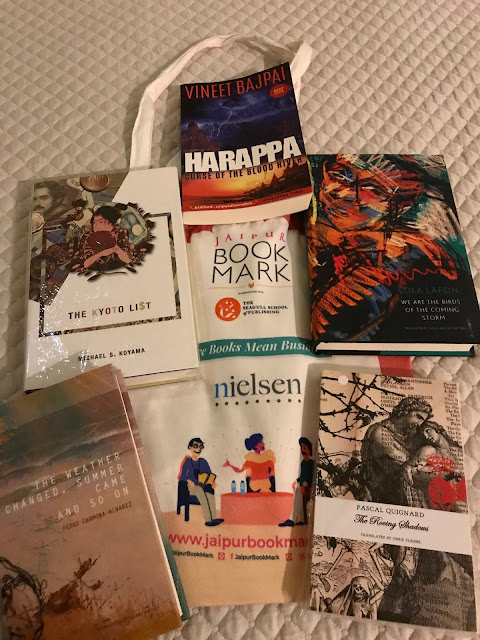