Appreciation is food for the writer's soul 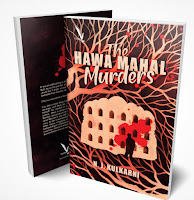 Now that a month has passed since the launch of my book The Hawa Mahal Murders, it is a good feeling to know that people are loving it. There are so far 10 Amazon reviews, all of them 5-star reviews. I had written something about reviews immediately after the launch too.

While the first review has remained a favourite with me, there's another one I would like to show here.

The Hawa Mahal Murders turned into a mini-series? Maybe a movie? Well, things are on the anvil. So it is not a pipe dream. The characters in my novel are well etched, the story is fast-paced and scenes are described vividly. And people have shown interest.

There are 5 GoodReads reviews as well
and they are shown at the bottom of this post. This is an excerpt from a new review:

The Hawa Mahal Murders is far better than a lot of books out there but like this article on Quora says, a debut writer finds it difficult to get exposure. My name has been mentioned in the Quora article, as a part of an answer to a question as to whether there are writers who are less exposed to the world but are better than Chetan Bhagat.