Author of the Month at Vishwakarma

This month, October, Vishwakarma Publications, my publisher has given me the honour of being their Author of the month for my book The Hawa Mahal Murders which was launched during the inauguration of PILF19 with Javed Akhtar. 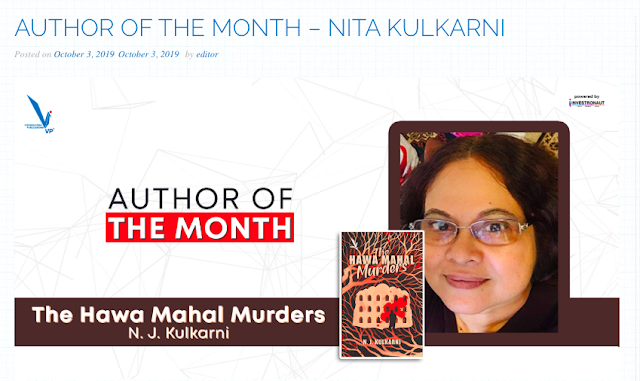 These are some of the excerpts from the interview which was taken by Richa Singh:

The genre of thriller originates from the Gothic which has a large rambling castle as its setting. Since Hawa Mahal is a typical Gothic building what importance does it hold to your murder mystery thriller?

There’s a character in my book called Raja who comes from a poor family. He wants to make it big and even fancies himself to be a king. He has grandiose
dreams of building a palace just like Hawa Mahal. He does become very rich, and when he does, he has a building made on the lines of the real Hawa Mahal. Of course, it’s an imitation and that is the whole point. It’s an ugly building from an architectural point of view. So, in the novel, this building in Mumbai, called Hawa Mahal, becomes a symbol of sorts....


Thrillers have seen quite a resurgence in India especially with the popularity of “Sacred Games”, which is itself an adaptation of the thriller novel of the same name. So, in your opinion, why have thrillers made such a comeback and why did you choose to write a thriller rather than a work of any other nature.

I wrote what I love to read. I love reading thrillers, always did. But my book is more than a thriller. I like to think that it tackles some important underlying issues in this society....


Overcoming a bad marriage, as your character Smita does, involves laying bare the vulnerability of being a woman. Why was it important for you that your character should have such an arc?

A vast majority of Indian women put aside their hopes and dreams and follow society’s dictates. The hold of the parents is very strong...I created a character with high self-awareness, someone who faced her fears and tried to make sense of her life.

How did you get the idea of the book? Walk us through your writing process.

I wanted to write about a middle-class Indian woman going through issues common to our society. I wanted a relatable character and relatable issues, in the Indian context. Even my other main character, Jai, goes through issues that people commonly face – a corrupt system for example....


How was your experience of publishing with Vishwakarma Publications?

I consider myself very lucky to have got a publisher like Vishwakarma Publications. I found their team sincere, helpful and friendly.

I have read one of Margaret Atwood’s novels and plan to read the others too. I like her writing style.